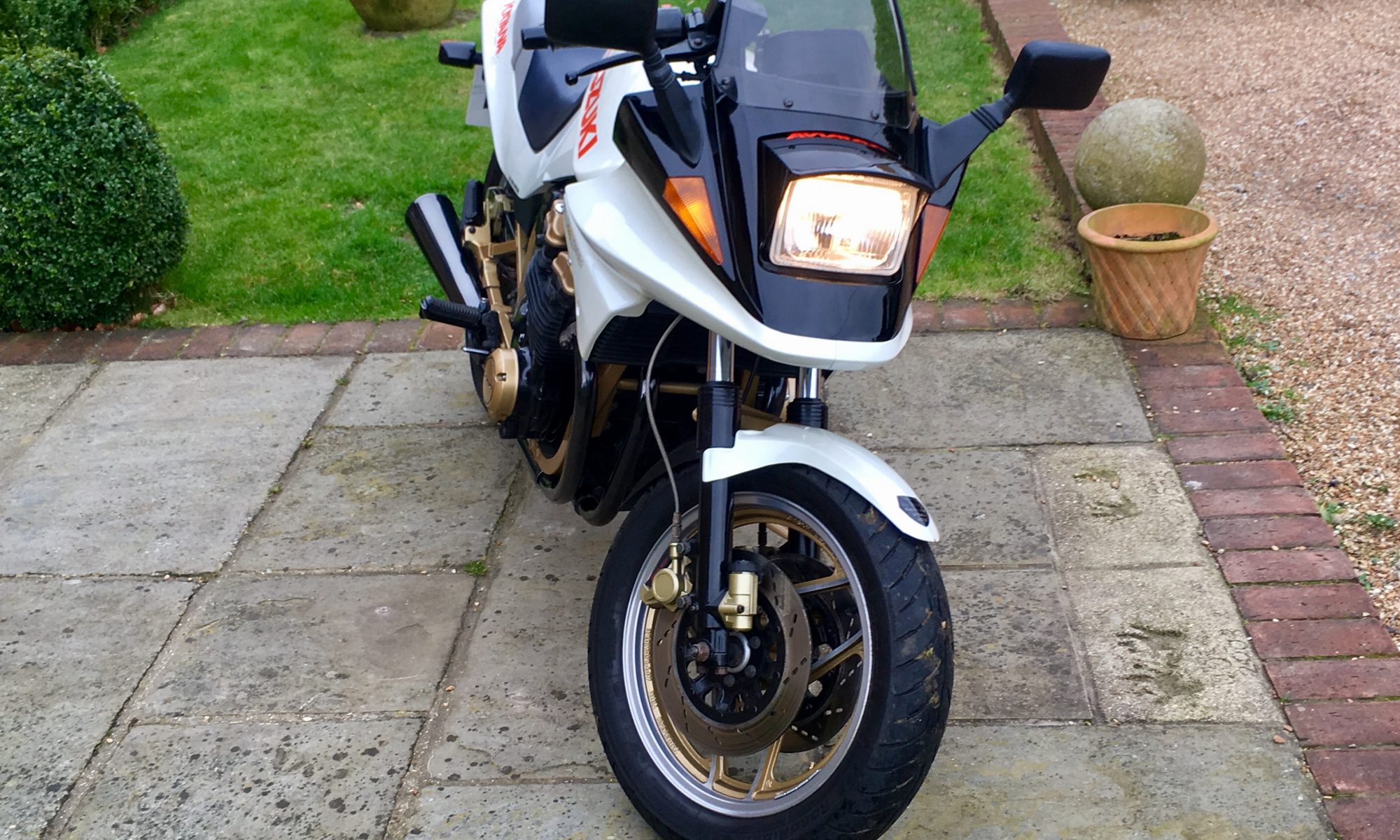 So there I was, an innocent kid around 1985, Street Hawk had aired recently and I’d ride my Raleigh Striker bicycle around wearing some massive elasticated black tinted visor I’d bought from a beach shop, must have been fashionable beach wear in the 80’s lol, right up until some teenage yoofs laughed at me and said, “ha look, he thinks he’s Street Hawk”. 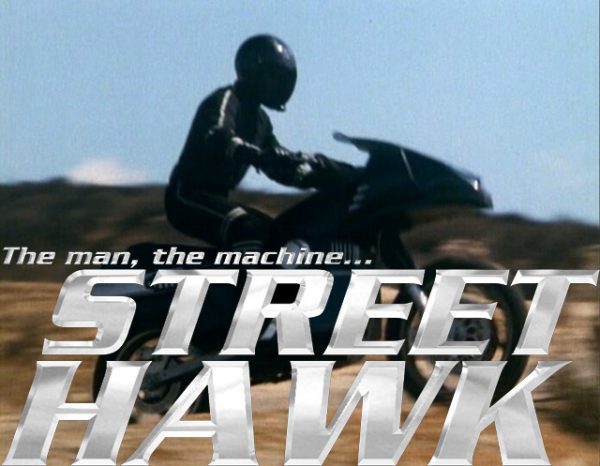 It must have been a convincing enough impression then, I should have taken it as a compliment, instead I engaged hyperthrust and high tailed it out of there!

Anyway, it must have been the ’86 Tamiya catalogue, around the time I was bought a Tamiya Hornet RC car for my 10th Birthday, a time when I would longingly spent hours poring over the Tamiya catalogues, I fell properly in love with my first motorbike. The Suzuki Katana 750S (thank you Tamiya 🙂 )

It’s not hard to see why, I thought it was the most awesome looking motorbike I had ever seen! Just like Street Hawk (which must have been inspired by the Katana) it had a pop up panel (housing a headlight though, not a laser!) I spent ages staring at it.

Anyway, fast forward 31 years to be precise and I turned a childhood dream into a reality…placing a deposit on this little beauty…a 1986 Katana 750SE. It has a lovely story behind it;

These were never originally made for the UK market. They were originally made for the Japanese market, where they were restricted by Japanese law to 77bhp. Some were made for export to Canada and Australia too. The Australian bikes, courtesy of the Bathurst 6 hour endurance racing (where they came in third with this bike in 1984 after a Yamaha RZ500 and Honda VF1000) were endowed with a larger 18″ rear wheel because it enabled a wider choice of race rubber at the time, along with the full power engine which the domestic bikes had to do without, raising power to 90bhp with wilder cams and bigger carbs.

Fortunately, a logistical error meant that 25 bikes destined for Australia, missed the boat. As a result, Heron Suzuki, the UK Suzuki distributor were offered these 25 orphan bikes which they took in. 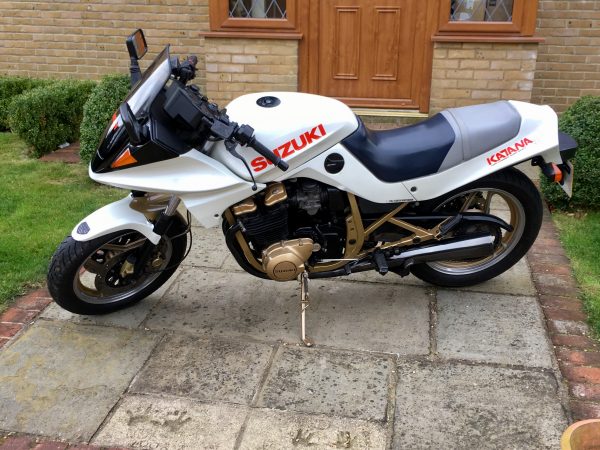 After successfully selling them, they asked if they could get some more. The only remaining bikes were of the domestic variety and were the restricted versions, subsequently approximately 50 of those made their way here. So only 75 of these came to the uk of which this is one of the coveted 25. All of the ones I have rarely seen over the years had aftermarket pipes on. This one has its original pipes. The previous owner had another UK GSX750SE from new which he tuned fitting a GSX1100 lump in it, he was one of the first in the uk to carry out that conversion many years ago and removed his system at the time and put it carefully in storage as they were redundant on his higher powered version. Fortunately they got to see the light of day once more and why the pipes look so mint. The bike has covered an average of 2k miles a year so it’s no museum piece, but it’s an authentic piece of history and I couldn’t wait to get it. They say never meet your heroes in case they turn out a disappointment but to be honest, I’d be as happy just to stare at it again!! 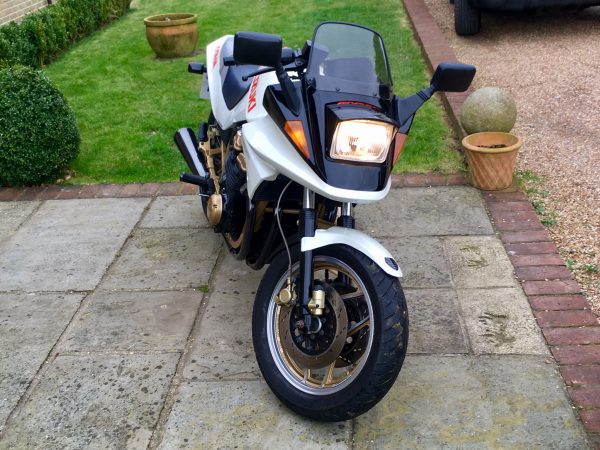 In keeping with the Pop up theme, and in honour of legendary Suzuki tuner Pop Yoshimura…an original Pop Yoshimura key ring is the finishing touch. 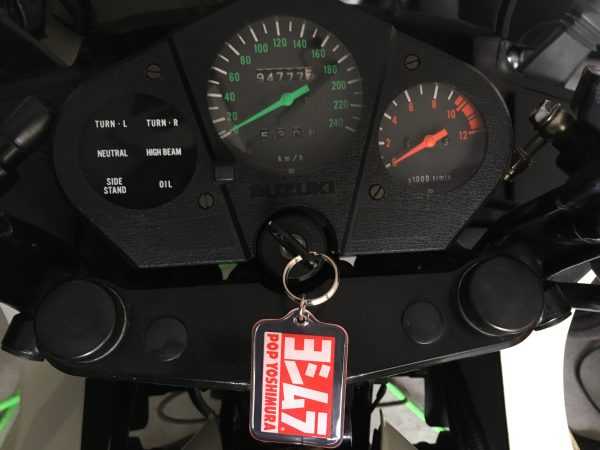 What’s it like to ride; This particular example runs faultlessly and is in beautiful condition, riding a bike designed and made in the early 80’s is an experience as you recalibrate your brain to weaker brakes, skinnier tyres and long throw throttle tubes requiring two twists of the wrist to hit the stop. Skinnier tyres make it a pleasure in town with quick steering and agility while remaining sure footed past legal speeds. The experience is always a sense of occasion, the GSX750 on carbs still a wonderful engine today, transporting one back in time back to the 80’s…what’s not to love?