Ducati Diavel Diesel. A limited edition collaboration between Ducati and styling house Diesel applied to the Diavel (DDD) culminating in 666 special units made worldwide. Sporting Ducati’s 162bhp Testastretta 1198cc V Twin motor with a 240 section rear tyre makes this one of the fastest accelerating motorcycles on the planet with a 0-60mph dash of 2.6 seconds. 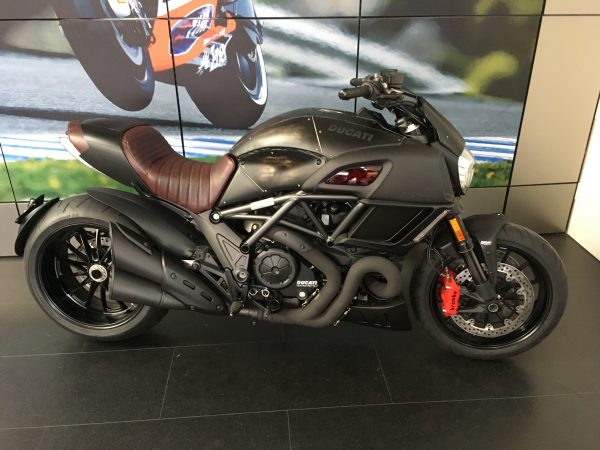 Andrea Rosso CREATIVE DIRECTOR OF DIESEL LICENSE“It’s an important motorcycle that reflects the hard rock side of Diesel’s DNA. ‘Never Look Back’ engraved with the two logos illustrates the meaning of this partnership: a timeless motorcycle distinguished by many unique elements like brushed steel and visible welds and rivets. Ducati Diavel and Diesel, three words with six letters that form a perfect number, 666, the number of motorcycles in the world made by this new partnership.”

“ The collaboration with Diesel enabled us to explore original stylistic and technical aspects whilst staying within the Ducati brand and fully respecting its values. In this case we worked with Diesel on an already uniquely original bike like the Diavel and the result was surprising to put it mildly. The details characterizing the Diavel Diesel cannot fail to captivate connoisseurs of special bikes but also people from different walks of life, such as fashion. It’s always stimulating for us to move outside the world of motorcycling and widen our brand’s areas of interest. ”

All bodywork is welded, riveted and hand brushed combining modern and classical elements… 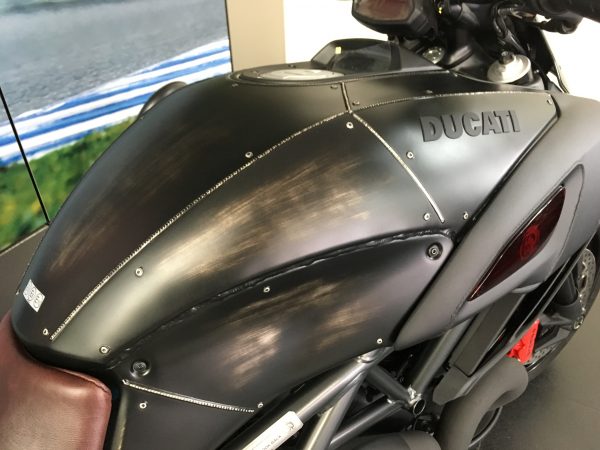 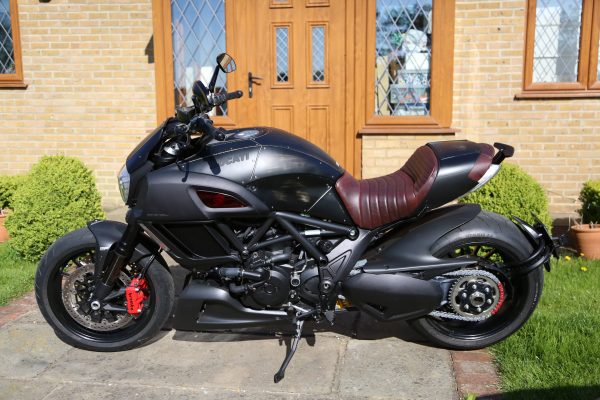 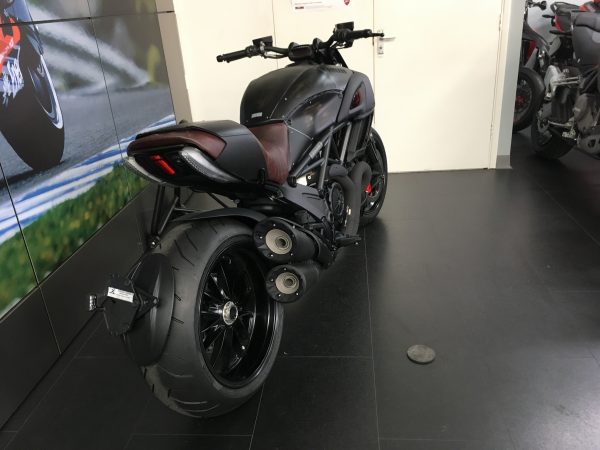 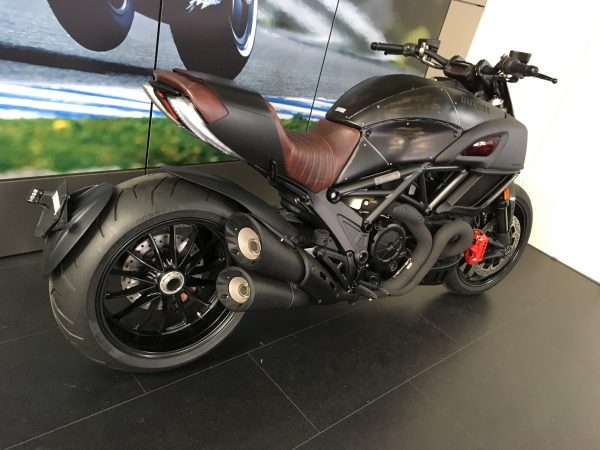 So the first service was carried out at the exact mileage required, rolling up to Laguna Performance just as the service light illuminated. £195 isn’t cheap for an oil change and some torque value checks/chain adjustment but it’s in warranty so to the dealer it goes. I have been sticking mostly to the 6k rpm break in limit with the odd excursion up to 7k. It’s not really a hardship since 6k equates to around 100mph anyway with mountains of torque below this. The tyres have bedded in nicely as have the brakes. 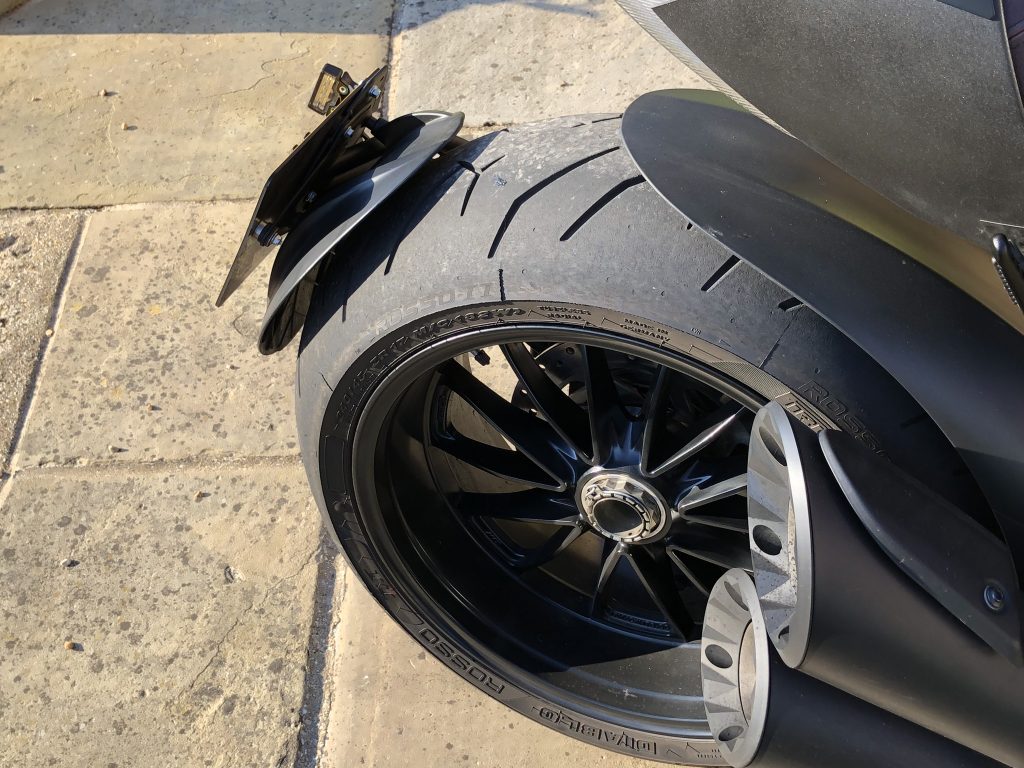 The first service is always a good time to reflect on the motorcycle. Contrary to many, I actually enjoy the running in process, it’s a time for discovery, a time to get acquainted with and learn the finer nuances of the bike, something that can be easily overlooked when travelling at warp speed! 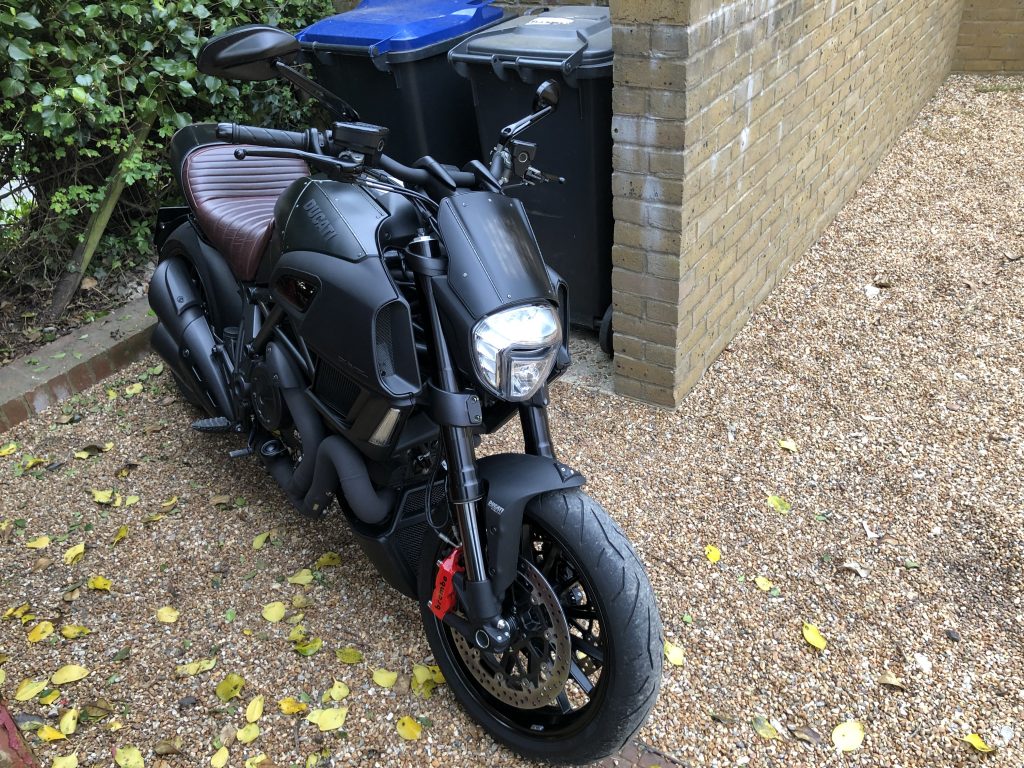 My first impressions were, wow this thing has some torque, the first phrase that came to mind after experiencing it was  something about this bike ‘will tear your arms out of their sockets’, so it’s affectionately my Wookie bike! Even limited to 6k, the low down grunt is there to be appreciated.

What seemed supremely comfortable in the shop was now a source of discomfort. The lovely leather saddle was a bit of a nut crusher as the hammock style seat rakes up to the tank, 20 miles and you start feeling it. Thankfully, either the saddle broke in or I did, either way, after the first 300 miles 50+ mile trips of a couple of hours or more are now quite bearable and dare I say comfortable.

What hasn’t improved is the suspension. I spent some time getting it set up right for me which has improved things, and improved the handling, which is very impressive for any bike, let alone a power cruiser! It goes about its business like a naked street fighter and has sufficient pace to trouble sports bikes. For the final iteration of the second Gen Ducati, I’m genuinely surprised that they have sold so many units without feeling the need to improve on the suspension. Frankly the setup is terrible. 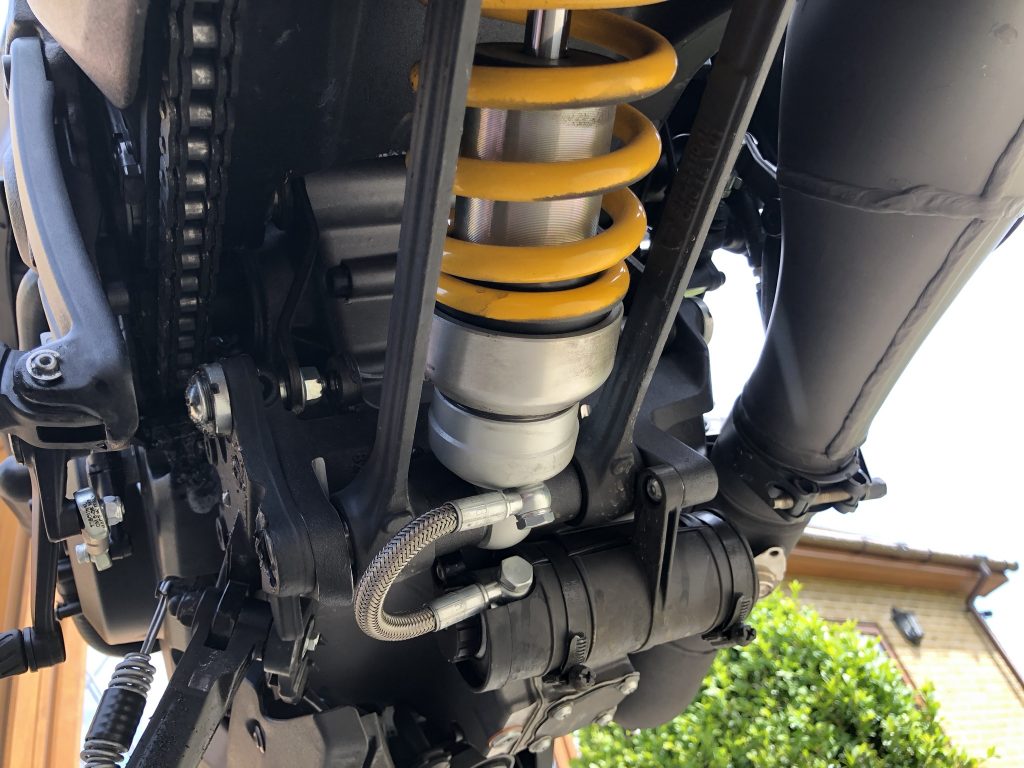 Not the handling as such, rather the ride quality which interferes with the handling when the road gets choppy but it’s more about what it does to the rider. Your kidneys get pumelled by the ride, you are bucked out of your seat on bumps, the whole thing is most disappointing because the bike has so much pent up potential crying out to be released but it is constrained by such an appalling setup. 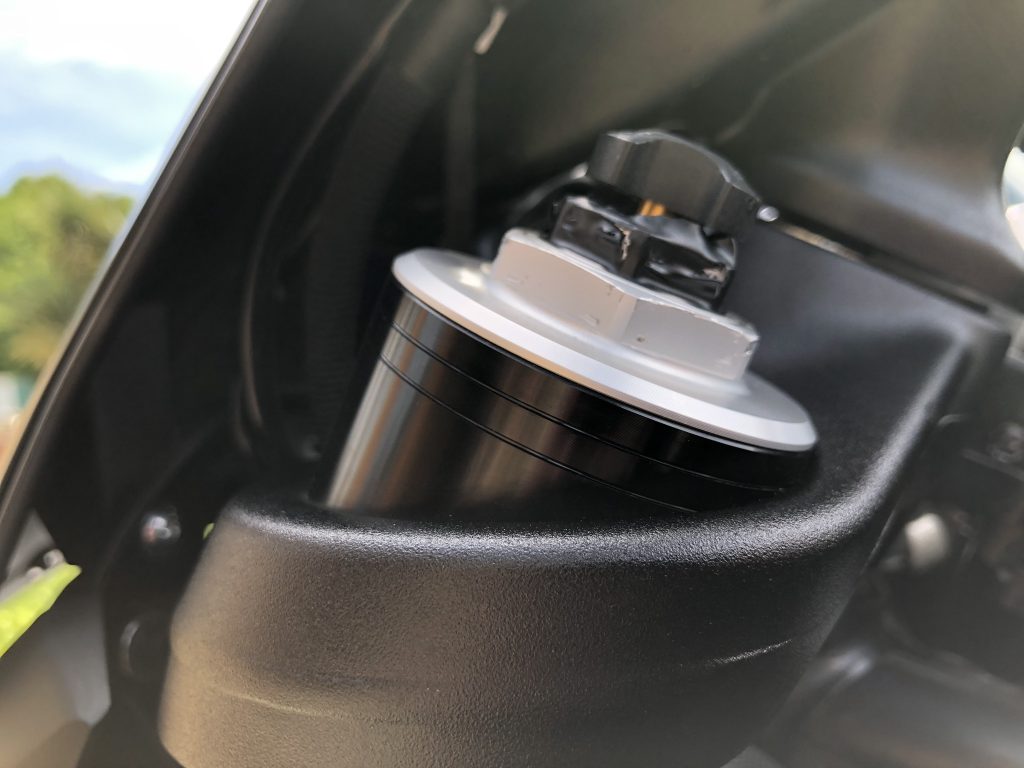 The front is rock hard, even on minimum preload, I can’t use up sufficient travel at the front end telling me the springs are too hard, at the rear, the  preload is wound up telling me the rear spring is too soft, this requires more compression damping to compensate which in turn leaves the ride too hard. I’m not sure what weight rider this bike could have been setup to, the answer is even more boggling because the rear is setup to a featherweight and the front to a sumo wrestler. It’s setup poorly for any rider. On billiard smooth tarmac the ride wouldn’t be an issue perhaps, but this is a road bike, not a track hack. This is the one department where improvement will be mandatory. I see Ducati have released the latest 1260S Diavel with full Ohlins suspension. If you’re in the market for the new 1260, I would definitely suggest one pays the premium and opts for the S model!!

While we’re on the negatives, there is one more gripe, this is more of an annoyance but it is so out of keeping for such a beastly looking bike; the engine has the most limp wristed fire up noise on the planet. Rather than roaring into life, this, more engine than bike contraption, coughs and splutters to a start with an emasculated effeminate fake cough type of feigned effort. Apparently the after market offer some heavy duty battery to starter cabling which can help this…I’m looking into it and will report back. My other V-twins ROARRR into life, I’d quite like this to do the same!

The latter is a small complaint in comparison to the suspension, in spite of these gripes however, the Diavel is a monstrous bike, the brakes, the handling, the torque, the riding position, quite simply this is now my go to bike.

So much so, that one almost yearns for a touch more practicality in terms of being able to carry something!! Well it’s my birthday and I received the Diavel tail bag. 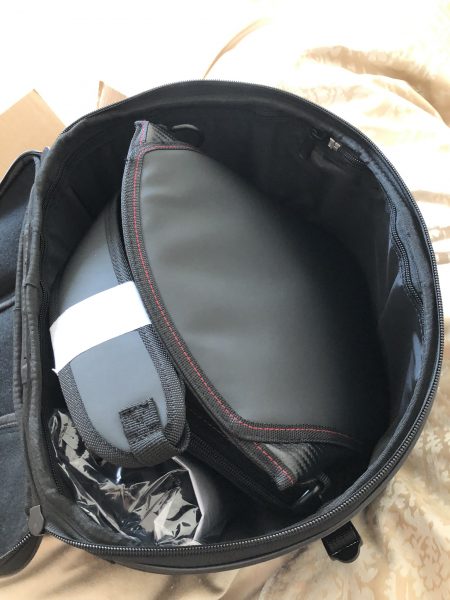 This is a great bit of kit, offering two velcro side pouches or the full on tail bag. 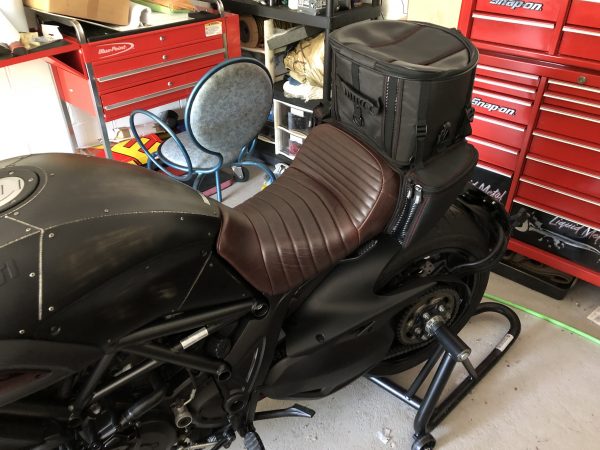 Just enough practicality for me. It looks good enough that the little velcro saddle bags can remain as a permanent feature with the added bonus that fitting meant unfortunately removing the cool zombie apocalypse rear seat cover but with the benefit of now leaving the saddle able to carry a pillion at any time! 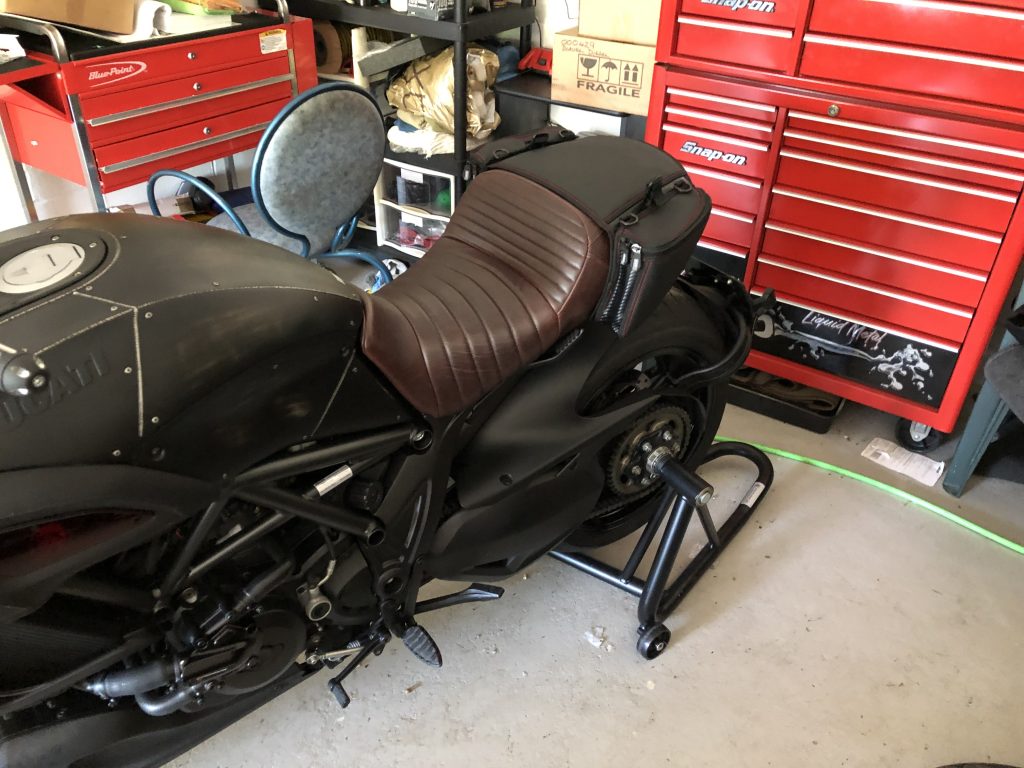