As expected of a bike that has been static for 24 years, there will likely be an element of recommissioning required.

On purchase, the brake and clutch lines were replaced with black Goodrich hoses to retain the stock look, new Pirelli Rosso III tyres and refreshed fluid. The engine was treated with Millers competition running in oil and fresh fuel had her fire up right away.

I had my reservations regarding brakes and front fork oil seals. The latter has been fine so far, the brakes on the other hand, while seemingly working fine, have had underwhelming performance. Of course it’s hard to know what normal should be but I can’t believe it would be this poor judging by the rest of the bikes capabilities. 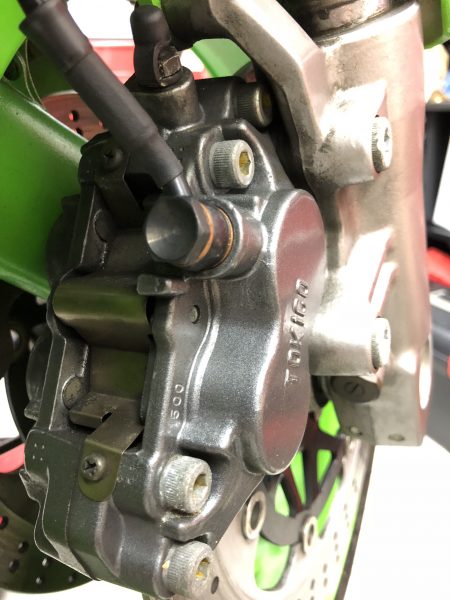 After the first 500 mile running in stint it has become obvious that all is not well with the front brake setup. There is some evidence that a pad is binding on the front disc. With the front wheel off the ground, spinning it by hand yields about 1.5 revolutions. Removing the left hand caliper extends that happily to 3.5 revolutions with a quick flick of the hand.

A caliper rebuild was therefore in order. I ordered up all genuine Kawasaki Seals and dust seals, O ring seals and some red rubber grease.

First up, the damage to the disc, it’s aesthetic really as it isn’t deep yet but would have become an issue. The first 500 mile bedding in at not more than 4k rpm is perfect for taking stock of what the bike needs in terms of recommissioning. 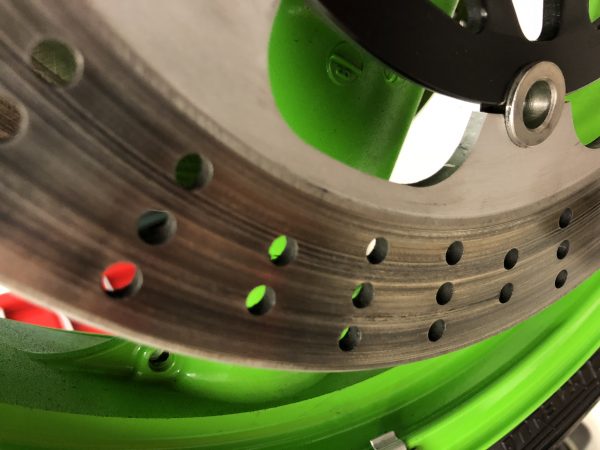 Splitting the caliper halves shows the pistons to be in excellent condition externally. There is no rust as expected seeing the bike had covered a mere 24 delivery miles (39kms) from new and had sat in a collection for the last 24 years until pressed back into light service by myself. 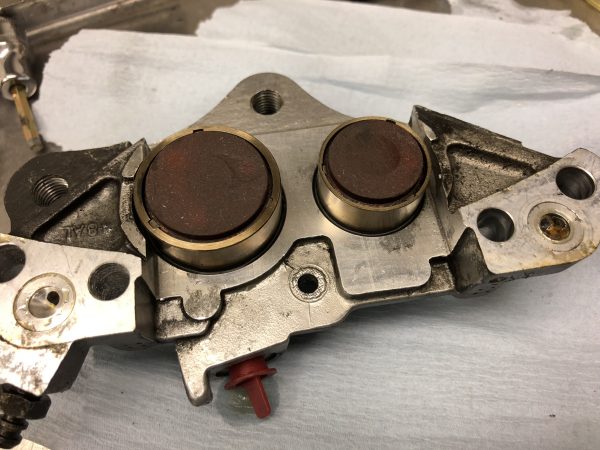 Closer inspection shows the dust seals are damaged, probably where they have been in the same position for many years then suddenly used. The larger piston dust seal had become deformed, likely causing the binding. The bore had some old residual brake fluid that had dried or congealed. 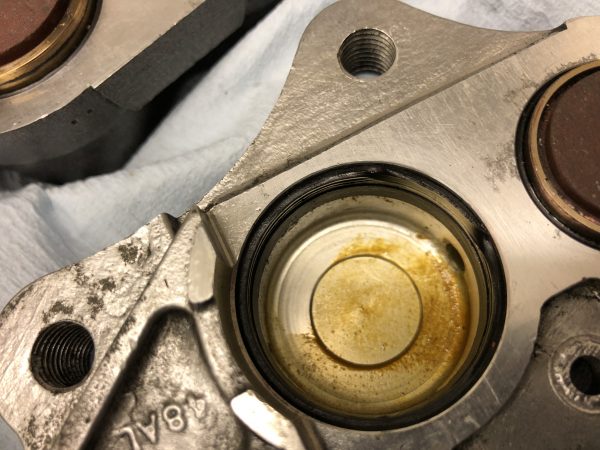 The piston itself showed a less healthy look to it’s internal face, which surprised me initially given the condition of the external face. A good clean with brake fluid and a toothbrush made everything better. 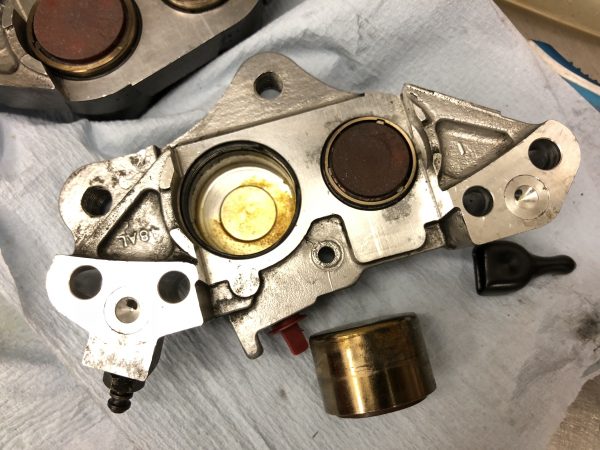 A closer look at the dust seal. 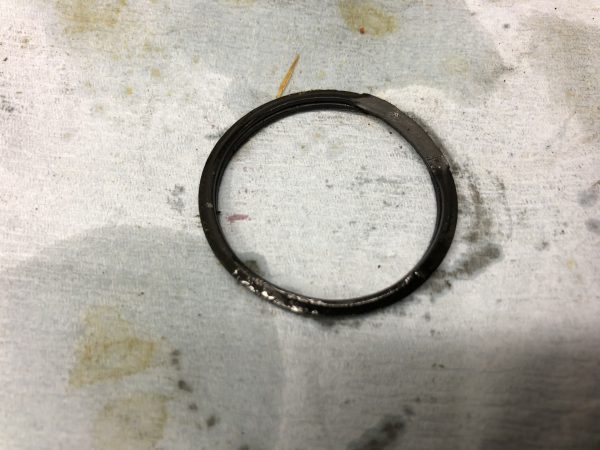 On removing the seals there is some congealed crud, old brake fluid mixed with light corrosion. This I guess pushes on the seal. The rear of the bore also has some dried(looks almost like baked on) brake fluid which is easily removed with some metal polish. 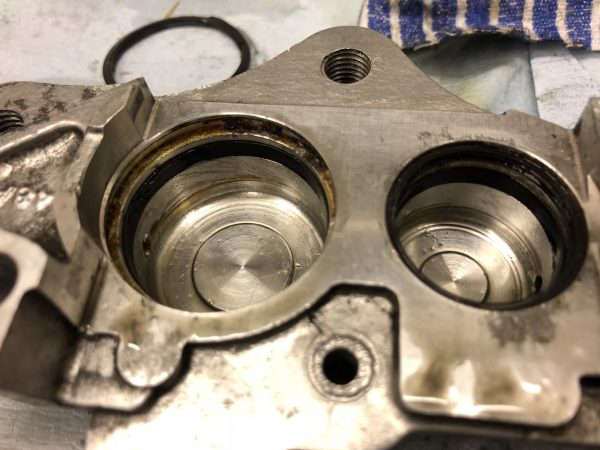 Congealed brake fluid featured in the galleries. Despite having new fluid with the fitment of the braided hoses, this is clearly historic gunk that a flush didn’t shift.

The pistons are generally in good order after a simple clean with brake fluid. The outer caliper half left hand piston has a tiny nick in it, which I later found out appears to be some form of corrosion eating at the piston. This is in a part of the piston which is not affected fortunately. This is commensurate with mild corrosion build up on the bore in the same location which has migrated onto the piston. It is however smooth. 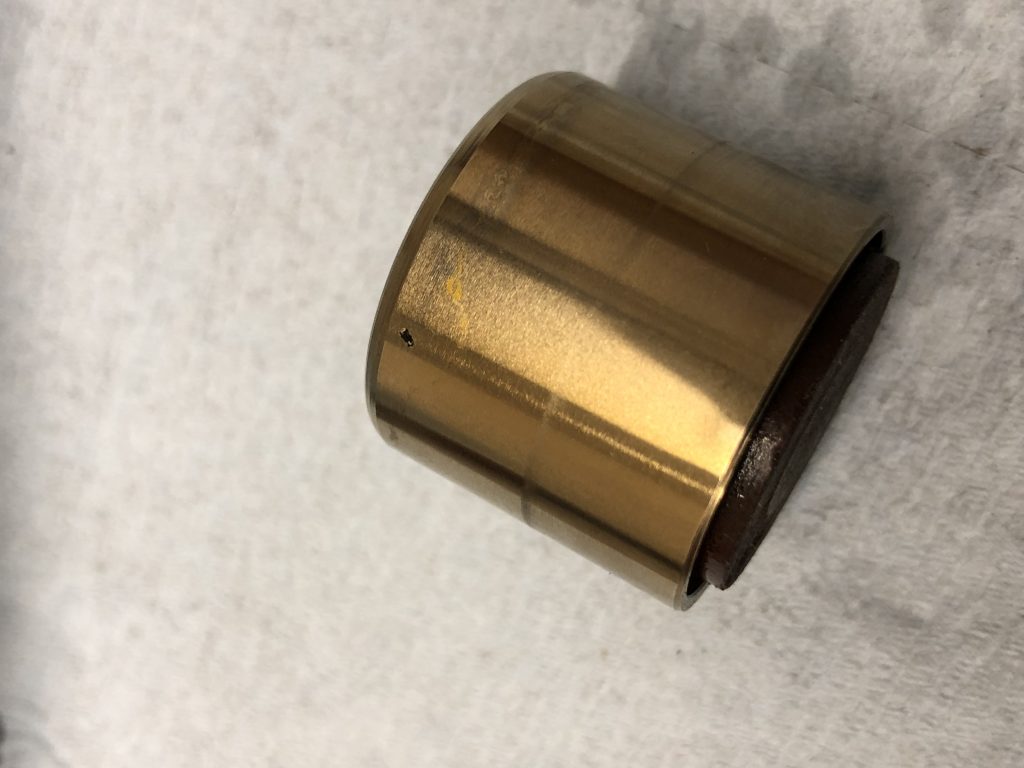 The inner half of the left hand caliper…once again the pistons don’t look great on their inner portions but fortunately clean up well enough. 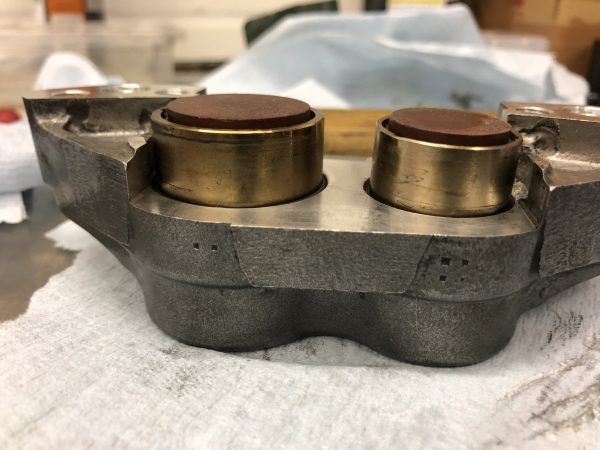 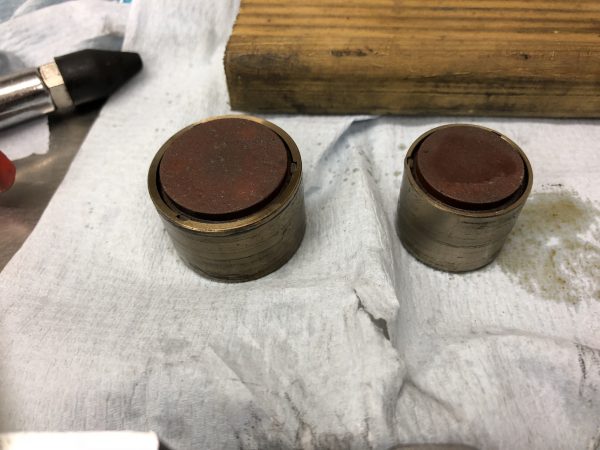 To this; With just the use of brake fluid. 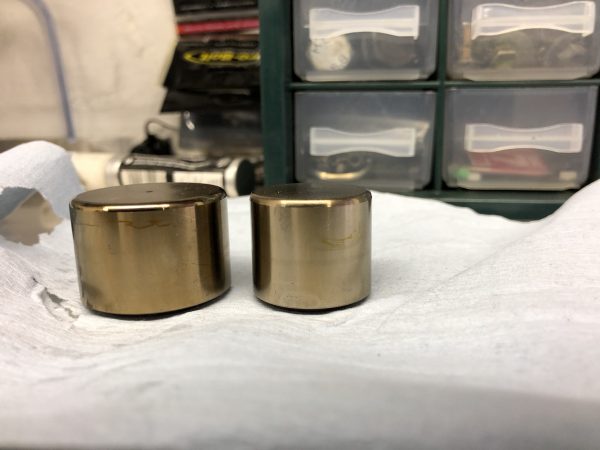 and here is the corresponding outer half after clean up. Unfortunately the thin coating on the caliper was compromised through the use of brake cleaner and break fluid which gets everywhere. The finish went soft and despite trying to remove it quickly it has eaten in and started to lift the finish in areas. 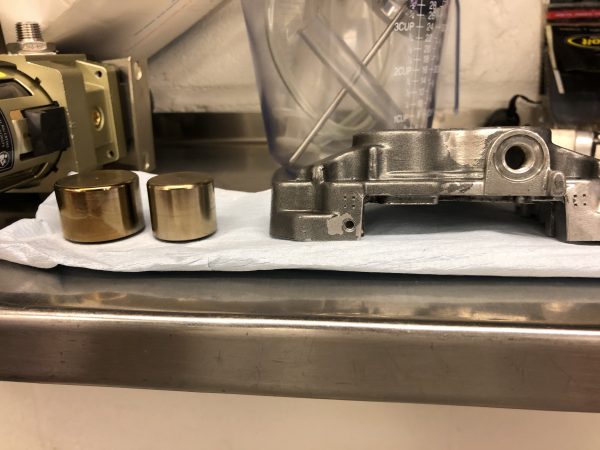 Compounded later with the use of an air compressor. 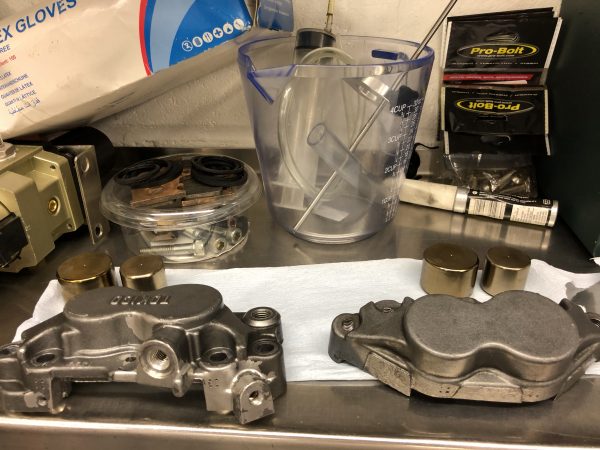 The inner bores cleaned up well with some metal polish; 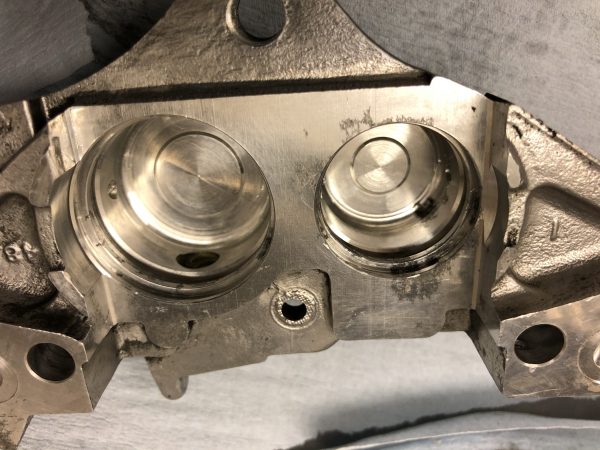 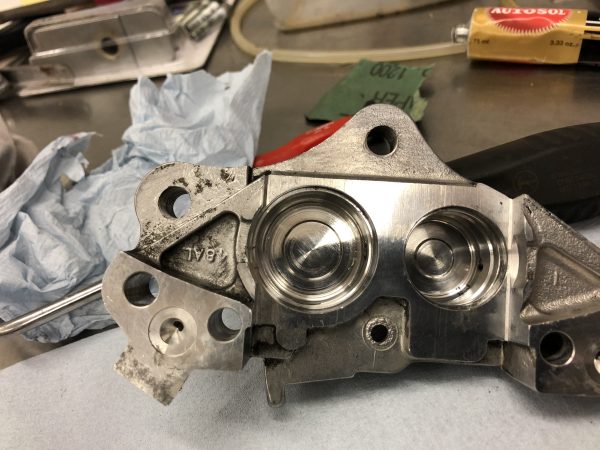 The inner side of the caliper had a spot with corrosion which had actually pitted the bore. Again not in an area of concern with regards to functionality but I’m pleased to have stripped these down to address bigger problems in the future. 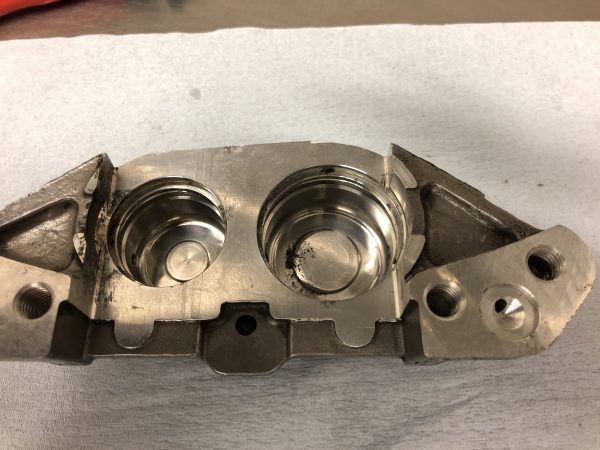 A close up shows the pitting. Was it through moisture in the fluid that had built up where it hadn’t been changed in 24 years? I wonder what a regularly used ZXR caliper would look like, one which had had frequent fluid changes? This is to the inner half of the left hand caliper. 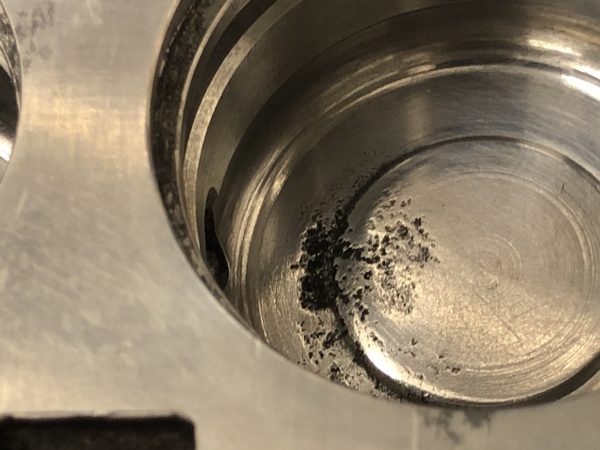 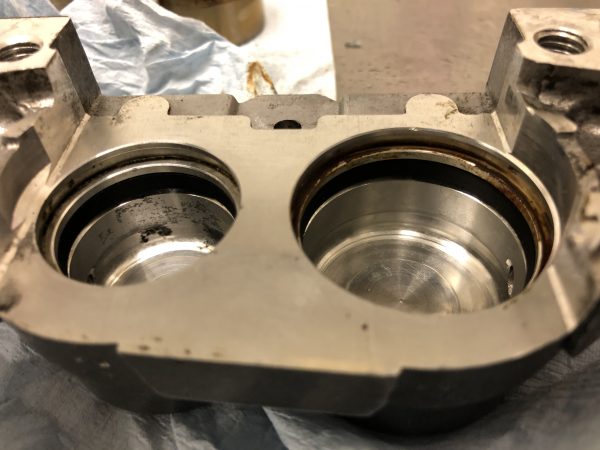 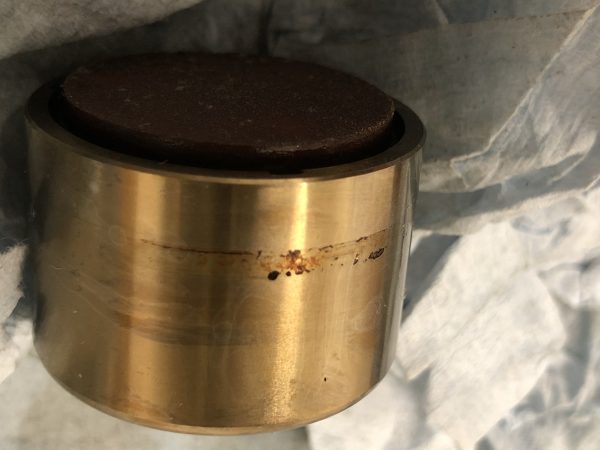 Some metal polish cleaned it up but the pitting remains. 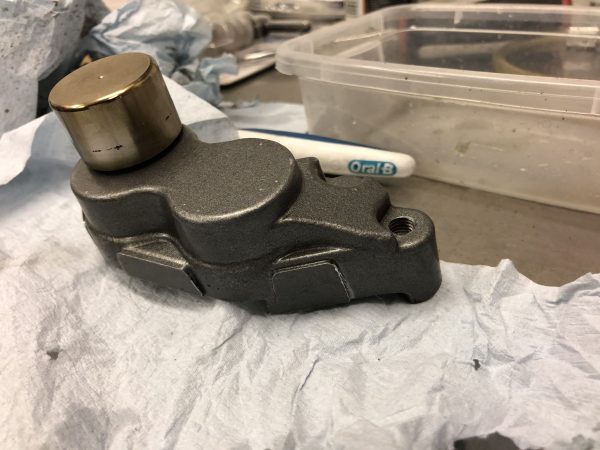 A close up of the corrosion in the bore… 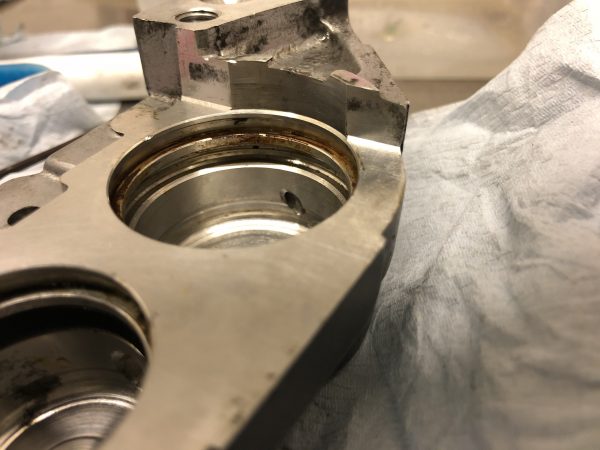 All cleaned up with metal polish…again a little bit of pitting in one of the bores at the base of it, this time on the outer half of the right hand caliper. 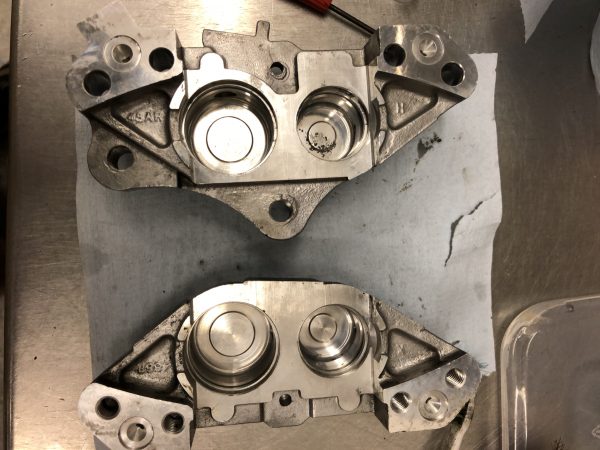 This time no damage to the caliper finish. Using a red plastic plug where the brake hose would go (came with my new oberon clutch slave for another bike) it seems plugging the hole from fluid coming out has helped retain the finish. This one was cleaned down with diesel and detergent/water rather than brake cleaner for the most part. 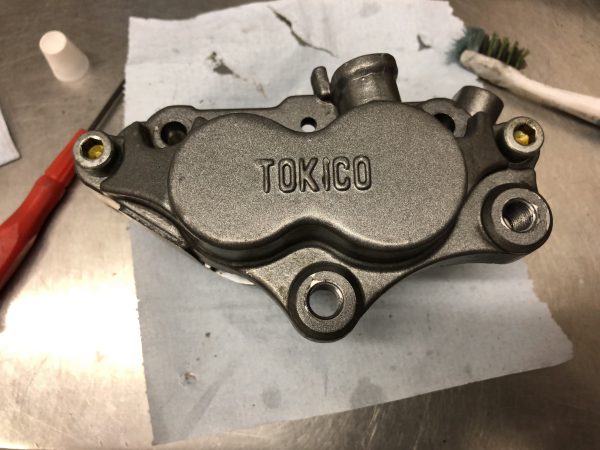 Now I am in a position to rebuild except the damage to the finish of the left hand caliper means this will need to be sent away to be powder coated. This means they will receive an acid dip and be blasted before having the vital bits masked up prior to application of a 3 coat system. I will update this once this work is done and document the rebuild. 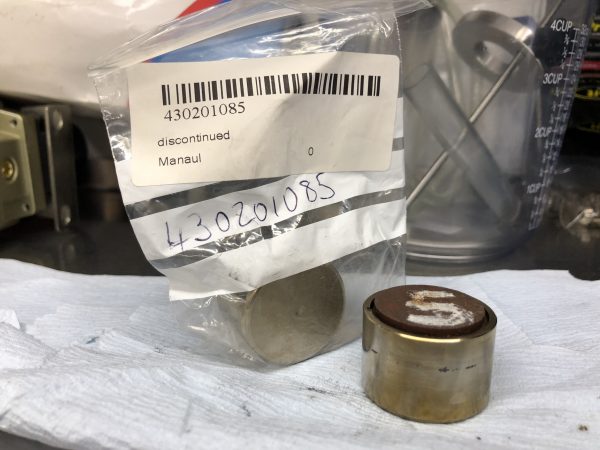 In other news, the rear caliper has one piston seized in it also on the inboard side, so this will also be under going the refurbishment treatment. All new seals have been ordered, hopefully the pistons will be ok!