It is 2017, my 40th year and the midlife crisis is well and truly upon me. A great excuse then to fulfil some of those life wishes. 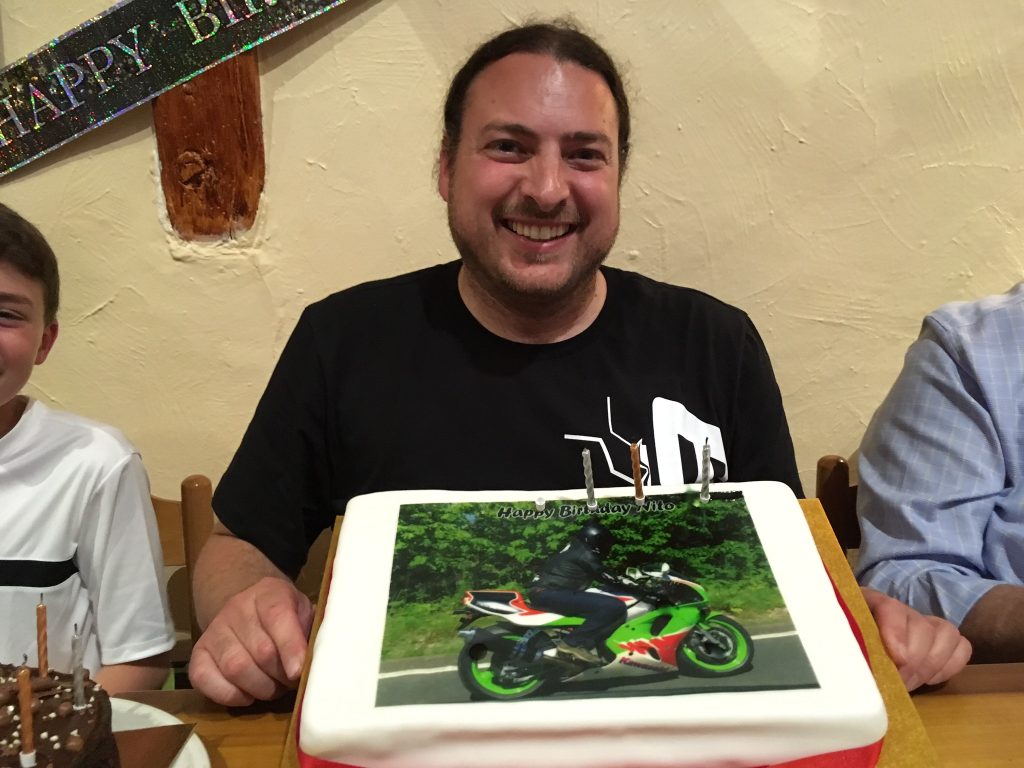 Since I first started riding on the road at 16, I have lusted after a ZXR750. It was one of those ‘one day’ bikes. I came close many times, but something always brought me back from the edge. Not this time though, because I finally found my dream bike, in my dream colours and it’s new. 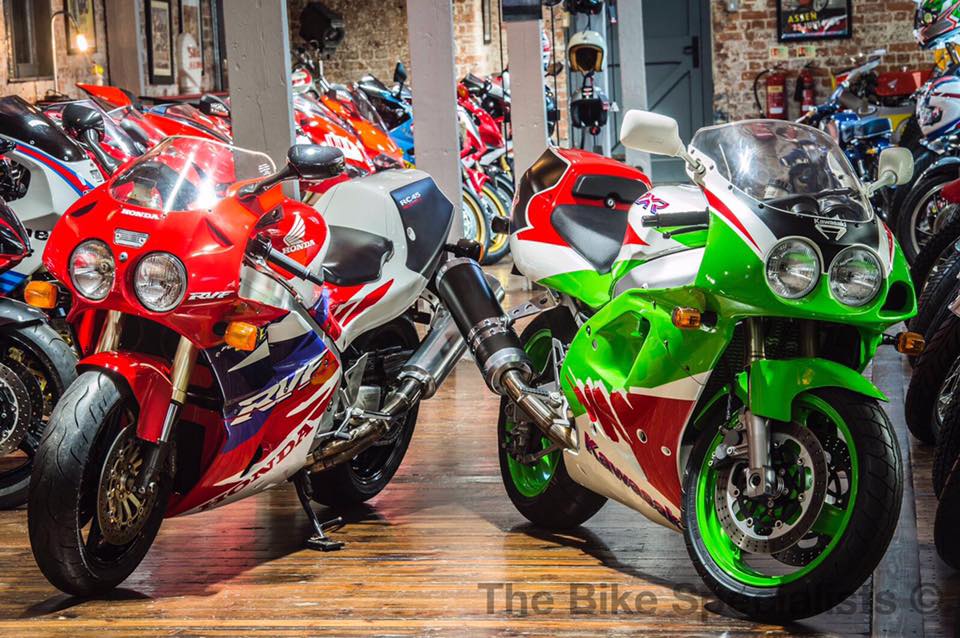 Yes, never even been previously registered. I am the first owner, of what is effectively a brand new bike.

I haven’t just bought a bike, but the ownership experience from day one. Supplied by the Bike Specialists who sourced this from Italy. 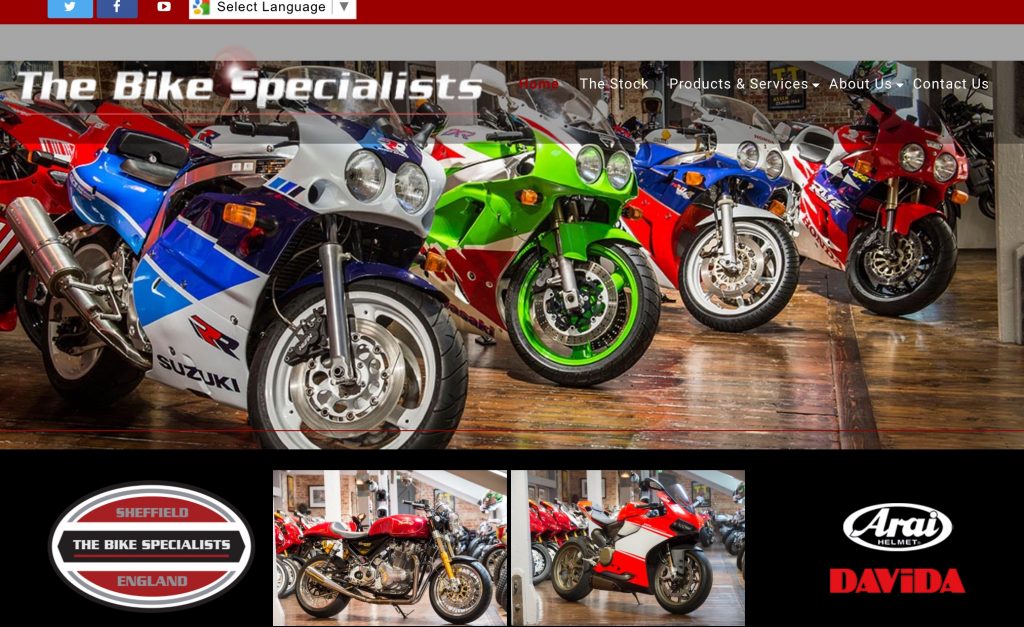 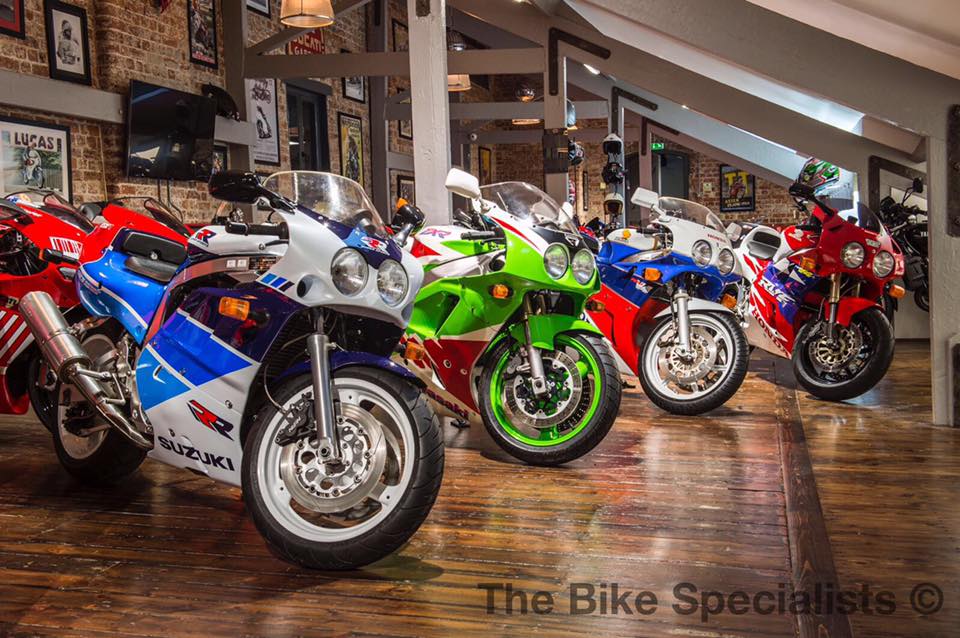 With 24 miles on the clock, I have to run in this time warp 1993 twenty four year old homologation beast from scratch. The only modifications are fitment of sticky new Pirelli Diablo Rosso III tyres and subtle black Goodrich braided brake and clutch hoses to retain the stock look. 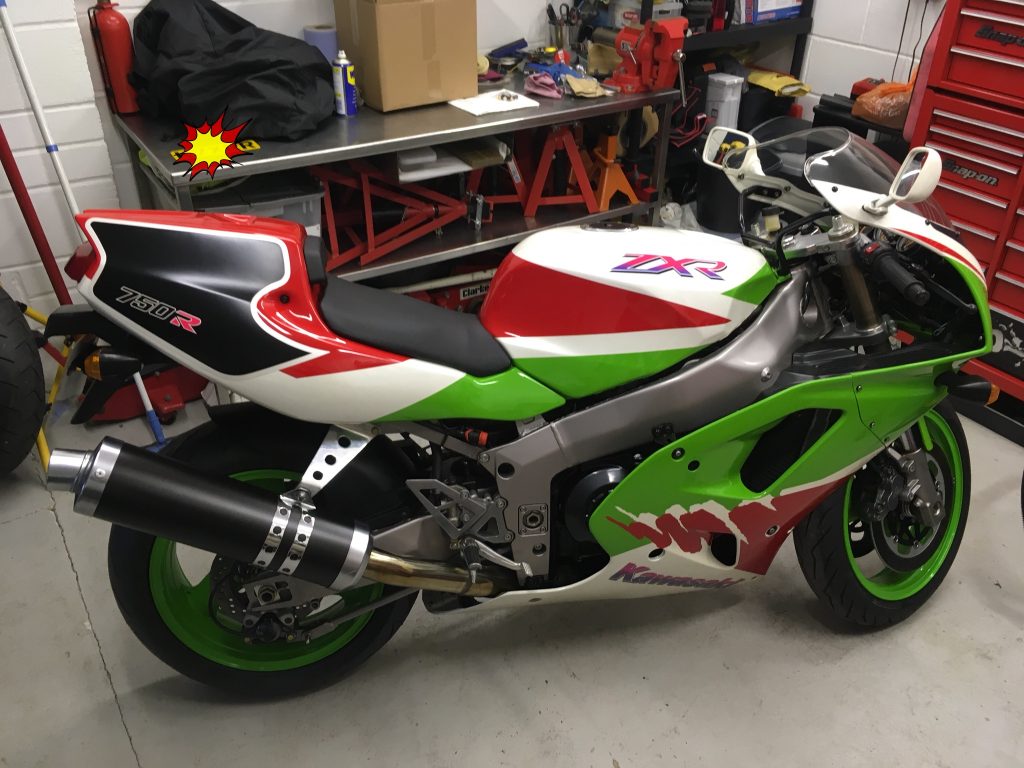 So after having it in the garage for a week admiring it and half debating the wisdom of actually using such a rare beast and the impact it may have on its value, I resort to plan A, which was always to enjoy it, and that means putting miles under those tyres. The insurance policy is deliberately limited to 2,000 miles a year to keep it as a special occasion bike! The stock silencer makes way for a period correct new old stock silencer, so the original unobtanium one can be retained and preserved in it’s unused state. 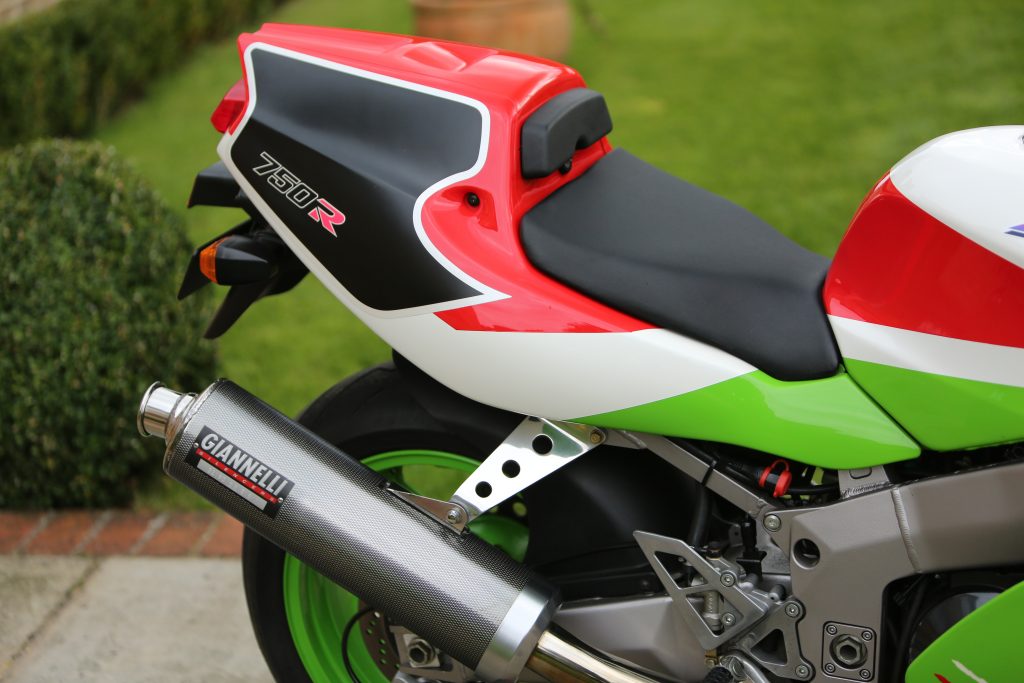 First though, there’s a 1000 mile break in procedure. No more than 4k rpm for 500 miles then 6k for the next 500 miles. With its notorious flat slide carbs and close ratio gearbox, and remembering the magazine reviews in the ’90’s complaining of the R’s tractability at low revs, I’m frankly too excited to care. I’ve been looking forward to this my whole life. They say never meet your heroes because you’ll be disappointed…time to find out then… 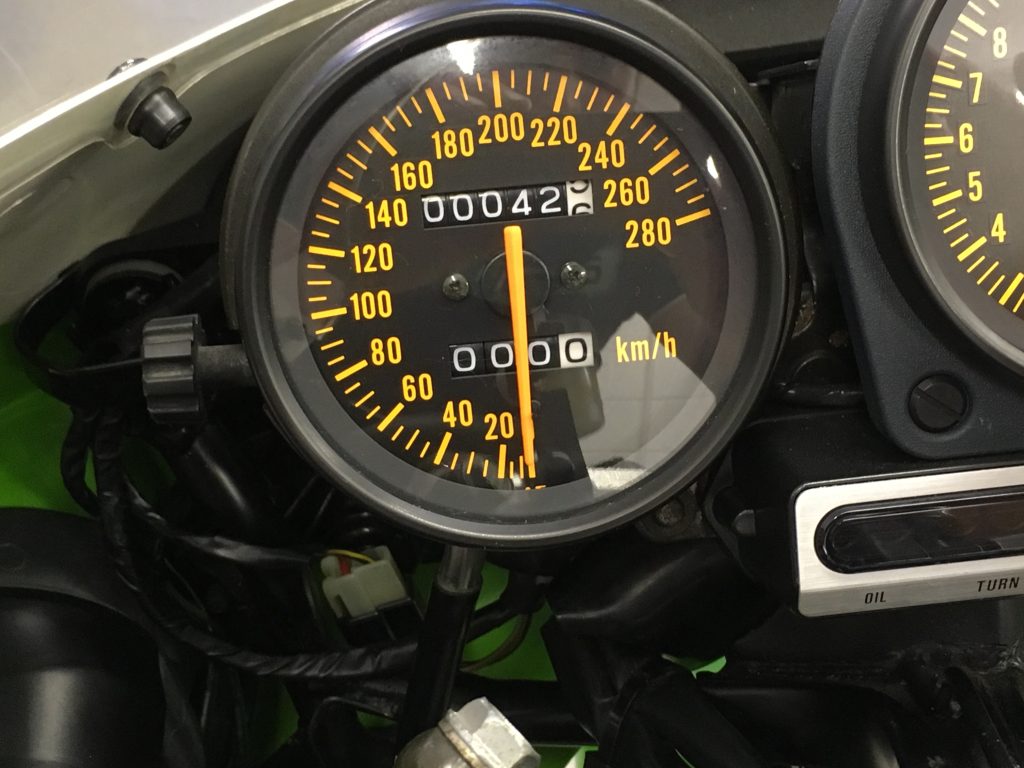 With 42kms on the odo (by the time she has been mot’d and delivered to me), she bursts into life after having required minimal recommissioning in the form of fuel and a battery plus an oil change with suitable Millers competition running in oil to replace the 24 year old mineral oil. We’re back to the days of chokes and carbs, memories come flooding back. The last carbed bike I had was 20+ years ago, the last bike I ran in was also my first bike ever, a similarly styled twin headlight Aprilia AF1 50 race rep which too read in Kph. I’m 16 again as I regulate the choke and wait for a stable idle.

Off we go, not over 4k…I’m down low, the riding position is very different from my middle age friendly Tuono, I replay the critics moaning of pressure on the wrists and rock hard suspension as I zip through the box. Wow, how close are these gears?? Seems to be dropping 250rpm between changes! Some change ups drop the revs more than this but boy are the gears close. Curiously the R’s also have a long first gear. With my 4k limit I max out at just under 60mph however first gear at 4k rpm incredibly takes me to half of my top speed! This means 30mph out of first then an average of 7mph per gear thereafter!! 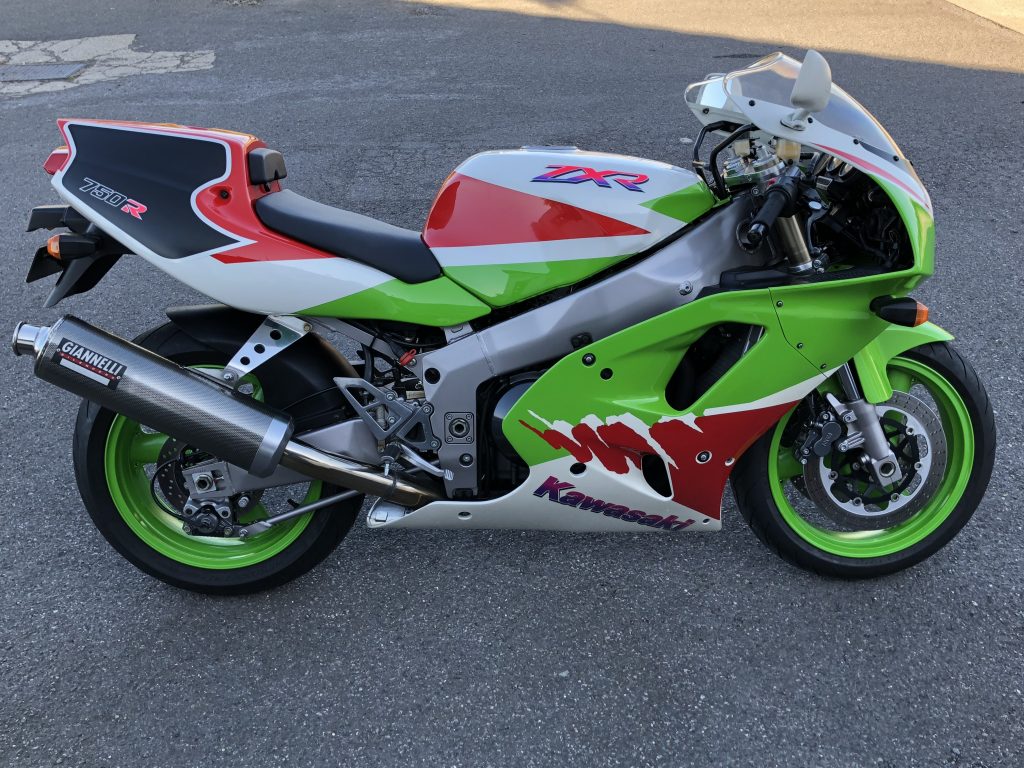 It sounds intoxicating even at these rpm’s, and so smooth. You realise what the magazines meant about pulling away in a hurry being tricky, you need to be very delicate with the throttle to avoid dumping too much fuel too soon into those carbs and bogging down. Realistically once over 2.5k rpm this quirk is a non issue so plenty easy to ride around. However I’m in no hurry as I drink in the experience. So this is what it’s like to ride a homologation special, the base bike built to enable Scott Russell to take Kawasaki’s first world title in the same year, 1993. The bike that beat off Carl Fogarty’s Ducati and the uber expensive RC45, the good old modest underdog that put both of these prima donna’s in their place. I like that I’m reminded of this heritage every time I pull out of a junction. Executing a precise clean getaway rewards rider finesse and sets the tone for the rest of the bike.

I find the riding position perfect, putting my weight over the front end reminds me of the close connection to the bike that these race reps provide, with laser guided precision you can aim the bike at corners and rely on a faithful trajectory. I remember the ZXR fondly hailed as having the best front end in the business and I see why. You can lean on it heavily as it turns very deliberately. The brakes are wooden, the suspension firm, fortunately being a heavier rider I don’t find the rear end too heavily sprung. After my V twin Tuono, this super smooth four is a revelation, it sounds incredible and so smooth. The gears feel intuitive as they change ratios quick as lightning, who needs a quickshifter. There is no jerkiness from the throttle, smooth power as I modulate the throttle and gears to keep within my 4k limit. Feels like riding a small bike as you go back to reading the road ahead, conserving momentum and pre planning your next move. This is fun. Rather than be a chore, I’m enjoying this break in, new tyres, new brakes and a graceful pace to learn the finer characteristics of this bike that do not require speed to appreciate, instead, savouring the finer nuances of how rewarding getting it right feels, when you have such a characterful steed. 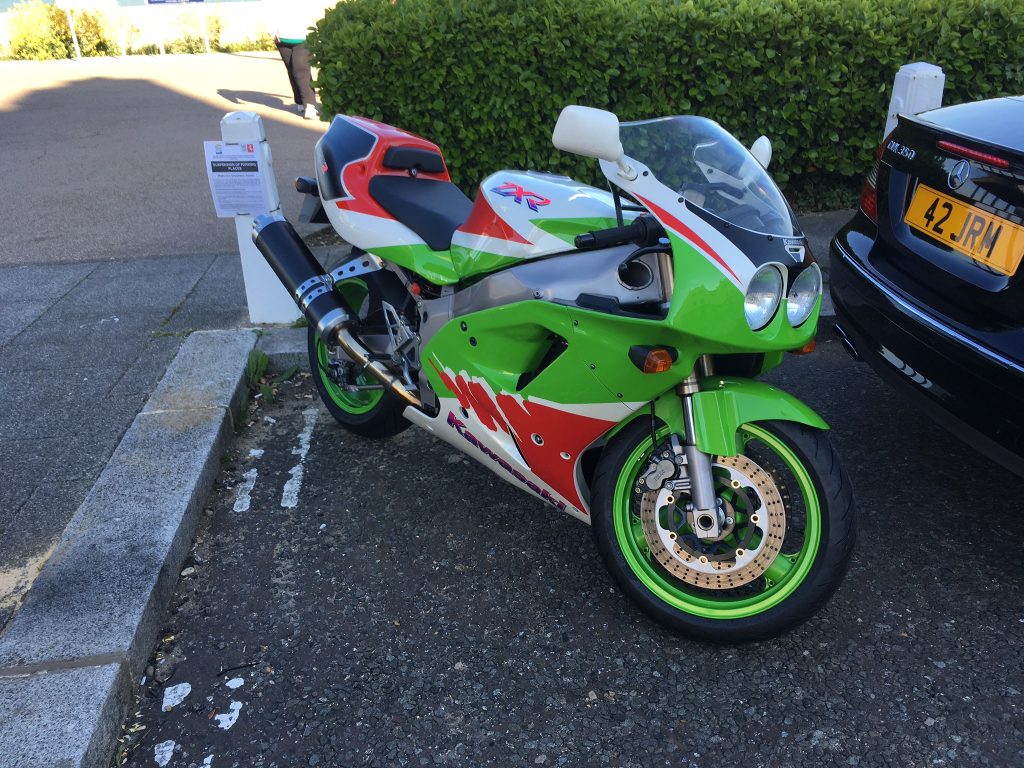 35kms later I’m parked by the sea. Radiant after such a long build up to this moment. Yes, I’m so pleased, this is exactly the bike for me, everything about it feels so familiar to my younger self. The layout typically 90’s like my bikes of the time. Thankfully the Tuono is a raw agricultural machine so I haven’t been ruined by modern machinery nor do I particularly want to be.

As I set off from the beach, disaster!! The tickover was around 800rpm once settled when I got it which sounded strained. After perhaps not allowing the revs to stabilise before setting off I pull up to the first junction and she dies. Too much fuel I suspect and it would appear I’ve managed to flood it. I push her into a car park and try restarting. She cranks well but its not starting. I try push starting with no joy. Eventually I call Carole Nash assistance, who will send someone within 90 mins. I clock up nearly 1km in the car park trying to clear out some fuel, I turn the tap off etc. Sure enough backup arrives. My tiring battery is pleased to have some fresh juice hooked up to it. After a short period of cranking she crackles into life. As the revs stabilise I discover the tickover screw, I adjust the idle to around 1200rpm, instead of sounding like she’s going to stall at any moment she now sounds happy, firing away joyfully. Back on the road there are no stalling issues and its back home with no further dramas.

For the next week I take advantage of the good weather and ride to work everyday. What a privilege to commute on one of these, fortunately my commute takes in some lovely windy country roads. After my first week of riding to work and back every day I have no aches, 350kms on the clock the tyres are starting to scuff up nicely and I’ve gone through my first tank of SUL and onto my second. Bang on 40mpg so far.

I can now appreciate some of the criticism of the rising rate of the linkage which goes from firm to smack your testicles into the fuel tank thud on unexpected bumps as the rear shock goes through the arc of it’s travel. A later model linkage can provide a more linear rising rate but it’s not something that has me overly bothered at the moment as I seemed to have learnt very quickly where the bumpy sections in the road are, besides; this isn’t a road bike, it’s a racing homologation special, it’s natural habitat is the track. Every molecule of its DNA is reminding you of this and every characterful quirk is an intrinsic part of the greater whole, to modify some better road manners might be to detract from this wonderful experience.